Understanding Zion’s weather patterns will not only help you plan a great trip to the park—it could also save your life. Flash floods (see below) are a serious risk when exploring Zion’s narrow canyons, particularly during the summer monsoon season.

Take a few minutes to learn about Zion’s weather, and you can safely enjoy one of America’s most amazing national parks.

Zion’s weather is heavily influenced by the North American Monsoon, which affects seasonal precipitation throughout the American Southwest.

During the hottest months of the year—July through mid-September—the desert bakes under intense solar radiation. Hot air rises as fast as 50 feet per second, creating an area of low pressure that draws warm, humid air from the Gulf of California and the Gulf of Mexico.

The storms generally dissipate by evening, and the next morning the cycle repeats itself. July through mid-September is called “monsoon season” in the Southwest, and flash floods are a serious threat during this time.

But the intensity of Zion’s monsoon season varies from year to year. Zion is located on the North American Monsoon’s western edge, which shifts annually, so some summers are extremely wet while others are unusually dry.

Flash floods are one of Zion’s greatest dangers. During monsoon season—July, August, September—powerful thunderstorms sweep through the region.

Storms can dump several inches of rain in just a few hours, and the rocky, sun-baked landscape does little to absorb the water or slow it down. Runoff channels into narrow side canyons, forming flash floods that can reach speeds topping 23 feet per second, ripping out trees and vegetation and tumbling boulders like ice cubes.

Perhaps most frightening, flash floods can happen when skies are sunny and clear overhead. If a thunderstorm several miles distant dumps rain over a canyon’s headwaters, a flash flood can roar downstream, catching unsuspecting hikers and canyoneers by surprise. The wall of water often moves so fast that it compresses the air in front, sending pebbles and small rocks flying through the air.

If you find yourself in the path of a flash flood, climb as high as you can as quickly as possible. It is not possible to outrun or outswim a flash flood. Even if you are only a few feet above the water, those few feet can save your life.

If there is no high ground, seek shelter behind a large rock that can break the wall of oncoming water. Squeezing into a crack or crevice along a rock wall is another last-ditch option.

The best way to avoid flash floods is to stay away from narrow canyons when the forecast calls for rain. Zion posts weather forecasts at all park entrances and visitor centers, and flash flood alerts are posted on Twitter. Flash flood alerts, which are issued by the National Weather Service, prompt the closure of The Narrows and other potentially dangerous trails.

Canyoneers, who seek out narrow canyons, face the greatest danger from flash floods. When picking up canyoneering permits, ask about the weather. If a park ranger suggests staying away from certain canyons, heed the advice. Canyoneers who disregard ranger warnings have died in flash floods.

As temperatures cool in autumn, a new weather pattern takes hold. From November to March, prevailing winds arrive from the west, bringing moist air from the Pacific Ocean.

Most of this moisture falls as snow on the Sierra Nevada Mountains, but some finds its way into southern Utah, where it falls as snow or rain in a mild, steady stream.

Although winter storms are much less intense than summer storms, they can sometimes linger for days. Nearly half of Zion’s precipitation falls between December and March. 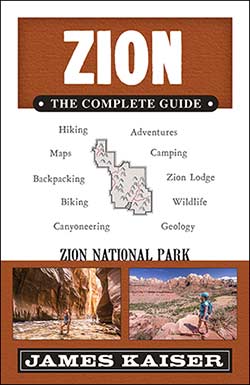