There are over a dozen islands lying just offshore Acadia National Park. Many are accessible by ferry and make a great day trip. If you’re looking for peace, quiet or a genuine slice of coastal Maine, any of these islands are great places to visit. 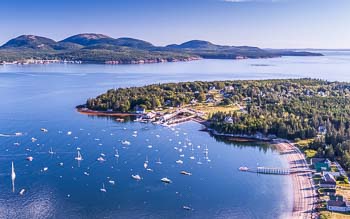 One of the most rugged, remote – and beautiful – islands in Maine, roughly half of which is part of Acadia National Park. Hike, bike or sea kayak around Isle au Haut. Lying six miles off Mount Desert Island, Swan’s Islands boats 7,000 acres of classic coastal scenery and one of the prettiest harbors in Maine.

*Adapted from Acadia: The Complete Guide

Over three thousand islands dot the coast of Maine—one of the highest concentrations of islands anywhere in the world. Yet just 15 Maine islands are inhabited year-round. They are among the most culturally unique places in America, and four of them are accessible by boat from Mount Desert Island.

When settlers first arrived in Maine in the late 1700s, offshore islands were considered the best places to live due to their proximity to fishing grounds and coastal shipping routes. By the late 1800s, over 300 Maine islands were populated year-round. But as railroads and trucks displaced ships as the most important forms of transportation, islanders found themselves physically cut off from much of the modern world.

Over the past century, most of Maine’s offshore islands have been abandoned. Greater opportunities lured many islanders away, and those that remain face higher prices for just about everything. In recent years, however, technologies such as the internet and wind turbines have opened up new economic possibilities. Modern technology may have robbed the islands of their lifeblood a century ago, but it may yet lure a new generation of digital nomads seeking out the slow, easygoing rhythms that have largely disappeared on the mainland.

The bestselling Acadia guidebook for over a decade! Full-color and filled with insider tips. Save time & money!
View on Amazon