Joshua Tree’s geology captivates every visitor who sets foot in the park. The scenery is mythical, hallucinatory and paranormal all at once.

Add a couple of melting watches and Salvador Dali would feel right at home in Joshua Tree.

You don’t need to know anything about geology to enjoy the scenery here. But take the time to learn about the forces that sculpted the landscape, and you’ll look upon the park with a fresh set of eyes.

The seemingly fixed scenery rolls into motion. Mountains wash away like piles of sand. Ice Ages come and go like snowstorms. And 70-ton boulders dissolve like sugar cubes as you stare across the park.

The story of Joshua Tree’s geology begins nearly two billion years ago, when Earth was about half its present age. As eroded sediments washed off ancient continents into the ocean, thick sediment layers accumulated in the waters offshore. Over time, the bottom layers were compressed and fused into sedimentary rock.

The gneiss that formed in the Rodinian mountains is the oldest rock found in Joshua Tree National Park. Similar types of gneiss are also found in Australia and Antarctica, indicating that a chain of Rodinian mountains once stretched across all three continents when they were fused together.

Around 280 million years ago, Earth’s continents came together again and formed another supercontinent called Pangaea. The Joshua Tree region lay just off the northwest coast of Pangaea, and additional offshore sediments accumulated on top of it.

When Pangaea broke up about 210 million years ago, North America drifted west and collided with a vast tectonic plate called the Pacific Plate, which underlies much of the present-day Pacific Ocean. The collision pushed the Joshua Tree region up above water. It also generated intense heat and pressure that exposed the previously formed gneiss to a new round of metamorphism.

Throughout this process, the eastern edge of the Pacific Plate acted like a giant conveyer belt, carrying vast amounts of ocean water deep underground. The friction of the moving plates and the intense interior heat of the Earth caused the ocean water to boil, helping to melt nearby rocks and sending huge pools of magma rising up under Southern California… 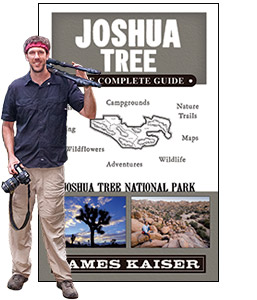 The bestselling Joshua Tree guidebook for over a decade! Full-color and filled with insider tips. Save time & money!
View on Amazon